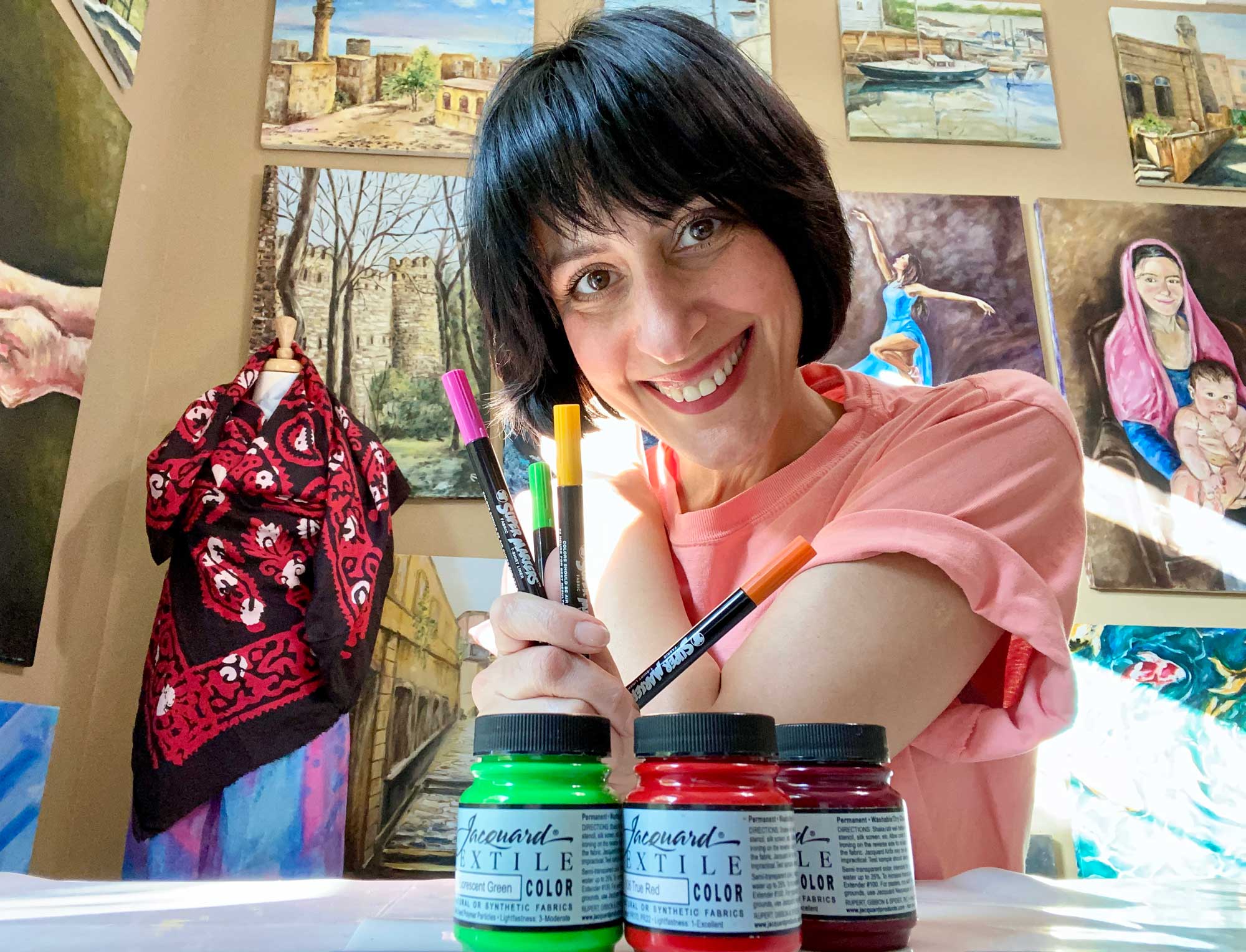 Narmin sought purpose in creativity. Then she discovered the Creator.

Narmin always wanted to be an artist.

“It provided a sort of escapism from the present darkness, both within and without. I thought it gave me a meaning in life and a direction,” Narmin shared.

From an early age Narmin wondered about the origin and purpose of life. She wanted to know where she’d come from and why she was here.

But her parents weren’t sure how to guide her, and her teachers couldn’t answer her questions either. Her friends laughed at her curiosity, so eventually Narmin stopped asking.

Right now you can help answer people’s deepest questions about life and faith—pointing them to the One who made them and has a plan for them.

As a teenage girl growing up in Azerbaijan, Narmin watched as freedom from the Soviet Union gave way to war with Armenia and then Russia—forcing over one million people to flee the war-torn border areas. Not long after, fire broke out in her family’s home, and they lost almost everything. A few years later, Narmin’s only brother accidentally drowned.

The questions from her early years flooded in again.

“I felt no hope, no understanding of the present and certainly no confidence in the future,” she said.

Narmin’s family, still reeling from their loss, made their Muslim faith their identity. For the first time in 70 years religion was permitted in Azerbaijan. “Finally, there was a Creator who was responsible for all life, and people were His creation and His plan,” Narmin shared.

But the sense of happiness and belonging quickly faded. “I felt no joy and no hope. Something was missing,” she said. Narmin studied books about world religions—searching out Islam, Buddhism and others. Nothing made sense to her.

Then one day, Narmin woke up in the emergency room with doctors, nurses and family members gathered around her. She had been visiting family when she was exposed to gas poisoning. She had passed out, been rushed to the hospital and miraculously survived.

“Could God have a plan for my life?” she wondered.

Narmin had always wanted to be an artist. So she immersed herself in artist training, even earning her degree in art. Finally she felt she had a purpose—a way to express herself in the world and escape from the pain it brought all at once.

She spent several years in the fashion industry, working at the first ever Azerbaijani women’s magazine. But her old questions kept coming back. She struggled with the purpose of her work and life. She wondered where she would go when she died.

Narmin left the industry, disillusioned, and sought out better employment in the country’s burgeoning oil industry. She was able to help her family financially and even met her husband Ken, an American, while at work.

“There was something unique about him,” Narmin remembers. “The way he spoke and made business decisions, even the way he showed his respect to our people and culture. These things and his kindness made me wonder why he was different.”

Ken was a Christian who was adamant about his faith. And despite her adherence to nominal Muslim practices, the two fell in love and were married.

They spent several years in England and finally returned to the United States. Not wanting to be at home alone on Sunday mornings, Narmin reluctantly joined Ken for church.

“I’m a Muslim and have no intentions of converting,” Narmin told the pastor on their first Sunday. The pastor welcomed her.

And for the first time, Narmin heard about God’s love. “If God is love, why don’t I know that God?” Narmin wondered.

You can share God’s love with people like Narmin—and help connect them to a local Underground Church where they can learn more about Him.

Each Sunday Narmin went to church, she recited the Scripture readings, Nicene Creed and Lord’s Prayer. And when she got home, she asked her husband questions about all of it.

He explained the gospel, including the forgiveness of sin and trusting in Jesus as the only way for salvation—teachings Narmin had never heard in Islam. He also encouraged her to read the Bible for herself.

When she did, everything began to change. She couldn’t understand it all. But she asked God to show Himself to her. “Complete peace and joy filled my heart,” she said.

Narmin trusted in Jesus and began growing in her faith. She also sensed God calling her to serve her own people.

The Lord began opening doors for her to participate in Muslim outreach ministries. And then He led her to Global Heart Ministries where she served as a satellite TV host and now a Social Media Evangelist.

Today her passions for art and the gospel have converged. Through digital media she shares artistic videos and social media content that engage seekers and speaks to the current issues people in Azerbaijan face. She also has the privilege of talking with those who want to know more about Jesus.

Narmin creatively shares her Creator with those who are searching for meaning and purpose in life—reaching into the most unreached region of the world with the message of Jesus. And you can too. By partnering with Global Heart Ministries, you can help give people creative access to the message of Jesus all across Central Asia and the Middle East. Through innovative technology and digital media, we share the Gospel with those who are searching for truth and connect them to the Underground Church where they can grow in their faith.

Would you give now to help reach women and men who are searching for meaning and purpose in life?

Five ways to reach your neighbor during Ramadan.

God often uses times of spiritual seeking to soften hearts—and reach those who genuinely want to know Him.